The first race was held in 1961 as a non-championship event. It has been a part of F1 since 1967.The Canadian Grand Prix was the most-watched racing event in the world in 2005 and the third most-watched sporting event. This rendition of the Grand Prix has a 10-year contract from 2014 to 2024. 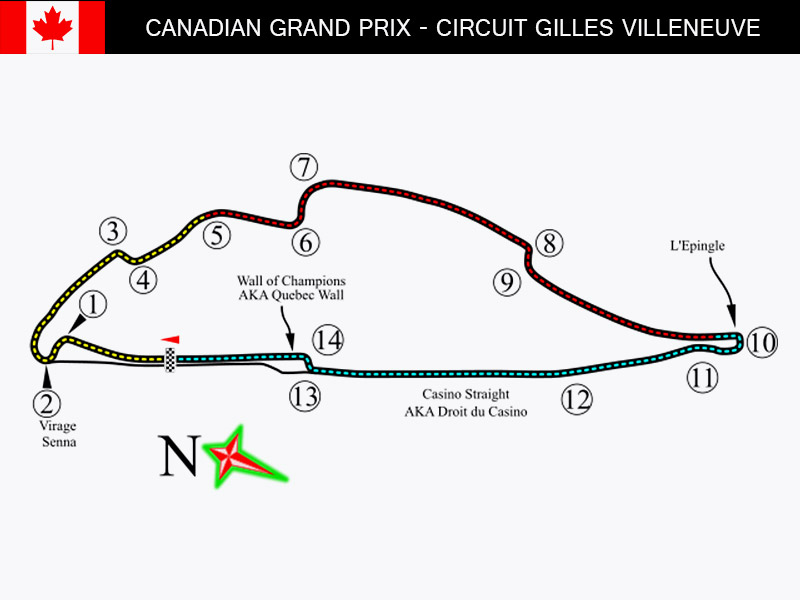 Before hosting the Formula One events, this Canadian Grand Prix circuit had received a variety of racing championships, such as the NASCAR Canadian Tire and Xfinity series, the Champ Car World Series, and the Grand-Am Rolex Sports Car Series. It is named after the Canadian driver Gilles Villeneuve who died in 1982.

The hospitality provided at this venue is excellent and welcomes sports enthusiasts to cycle, para-cycle, inline skate, and run when the circuit is not being used. It is surrounded by beautiful gardens and many artworks and makes for a pleasant place to go for a stroll. The track also provides a great view of Montreal and the St. Lawrence River.

The circuit is well known for its smoothness and how it is maintained to meet the FIA requirements. The barriers run close to the track and have entangled many champions. A famous part of the track also called the Wall of Champions ended the race of many champion players like Schumacher, Jenson Button, Jacques Villeneuve, etc. The 180-degree turn nicknamed the ‘hairpin’ provides the best examples of full wheel locking while turning at high speeds.

Recently, many changes were made in 2005 that elevated the curbs, making it harder for drivers to see and making this circuit more challenging. Since the change in technical regulations in 2017, cars have become faster by three to five seconds at this location. This forced the FIA to make changes to the safety features of every F1 circuit, including the F1 Canadian Grand Prix circuit. Due to this, the famous Wall of Champions exit was modified to make it safer.

The Canadian Grand Prix time for the start of the race was set at 1410hrs Eastern Time. The hard-fought race saw Lewis Hamilton of Mercedes to take the top spot. Sebastian Vettel and Charles Leclerc of Ferrari got the other two podium finishes.

The 2019 edition of F1 racing has gone through few technical changes regarding the aerodynamics of the cars. This has allowed cars to reach an excess of 350kmph on a regular basis, especially on the straights, and has improved the problem of overtaking by 20 percent. Another major change has restricted the number of teams that are allowed to keep the same line-up. The set of all changes regarding technical and sporting regulations can be read here.

The list of the drivers and the teams that participated in the Canadian Grand Prix 2019 are as follows:

• Antonia Giovinazzi of Italy drove for the team Alfa Romeo

• Kimi Raikkonen of Finland drove for the team Alfa Romeo

• Charles Leclerc of Monaco drove for the team Ferrari

• Sebastian Vettel of Germany drove for the team Ferrari

• Kevin Magnussen of Denmark drove for the team Haas

• Lando Norris of Great Britain drove for the team McLaren

• Carlos Sainz of Spain drove for the team McLaren

• Valterri Bottas of Finland drove for the team Mercedes

• Lewis Hamilton of Great Britain drove for the team Mercedes

• Sergio Perez of Mexico drove for the team Racing Point

• Lance Stroll of Canada drove for the team Racing Point

• Pierre Gasly of France drove for the team Red Bull

• Max Verstappen of Netherlands drove for the team Red Bull

• Nico Hulkenberg of Germany drove for the team Renault

• Daniel Ricciardo of Australia drove for the team Renault

• Alexander Albon of Thailand drove for the team Toro Rosso

• Daniil Kvyat of Russia drove for the team Toro Rosso

• Robert Kubica of Poland drove for the team Williams

• George Russell of Great Britain drove for the team Williams

While betting, a few things are to be kept in mind, such as betting odds, different types of categories on which you can bet, top form racers, etc. The current form of the drivers and the teams play a vital role in providing good coverage for your odds.

Other than the podium finishes, many other categories can be betted on, such as the Driver vs. Driver match bet. In this category, a bookmaker will pick two drivers, and a punter can bet on which one will finish in a higher position. This is a great entertainment, especially if two rival drivers are going head to head, such as Hamilton vs. Vettel.

However, bookmakers could match up drivers from a lower category as well. Another betting category is that of the fastest lap. This is one of the most unpredictable categories since many underdogs can step on the gas and speed through to get the best lap timing. All it takes is one lap to win.

Another essential thing to keep in mind is that not all circuits are made equal. The Circuit Gilles Villeneuve is a unique Grand Prix route that has its own sets of challenges and advantages that allow drivers and teams to try different strategies. Lastly, previous Canadian Grand Prix results are to be kept in mind while betting.

These tips are sure to get you covered on the basics of betting and the research that you are required to do.

The odds of winning at the start of the race for Lewis Hamilton were at +130, for Valterri Bottas at +200, for Sebastian Vettel at +375, for Charles Leclerc at +425, and for Max Verstappen at +1000. As the results showed, Lewis Hamilton’s winning run continued here as well.

Those who betted on Sebastian Vettel would have been utterly disappointed. This is because even though he finished first, he came second because he had incurred a five-second penalty in the 48th lap. This ensured Lewis Hamilton, who was never more than five seconds behind completed his seventh win in a row. For a driver vs. driver matchup, this would have been excruciating to watch, especially since Vettel maintained his lead, but the verdict was in favor of Hamilton. Vettel is still hoping new evidence will help overturn the decision.

Even though the Canadian Grand Prix f1 was hard to predict, the results established that Hamilton is still the undisputed champion of this season’s F1. All the major teams, namely Ferrari, Mercedes, and Red Bull — the Big 3 — maintained their winning streak, even though Red Bull turned out to be the weakest of them all. Ferrari and Mercedes claimed the top four spots. The Canadian Grand Prix winners, namely Hamilton, Vettel, and Leclerc would be happy to get the podium finish and increase their overall season points.

The elevated curbs of the circuit proved to be a challenge for drivers as was expected, while most of them avoided the infamous Wall of Champions. As the aerodynamics have changed, laps were covered in shorter times, and top speeds over 350kmph were achieved. However, many found it hard to hit the brakes and decelerate in time near the so-called ‘hairpin’ turn.

All in all, the 2019 Canadian Grand Prix winners were the safest bet, and the results proved to be so. As was expected of Hamilton, thanks to his good run in this season, he came out as the winner, even though it was Vettel that had crossed the finish line first. The rules of the race penalized Vettel for almost crashing into Hamilton that would have jeopardized the whole race. However, betting on either one of them was a wise decision since they got the podium finish.