In this article, you will find out answers to questions such as “What time does the British Grand Prix start?”, and other general info about the Silverstone British GP.

Grand Prix motor racing, being a form of motorsport, tests the endurance drivers and their cars at exceedingly high speeds greater than 100 mph. At earlier races, maneuvering at this high speed has ultimately caused the death of drivers and spectators. However, in recent years and editions, the improved safety precautions have minimized the effect of driving at these high speeds.

The Turin Grand Prix represents the first-ever Formula One event held in 1946. The event at Silverstone, United Kingdom in 1950 represented the first world championship organized by the FIA organization. Italian driver Giuseppe Farina driving the Alfa Romeo car won the first race at Silverstone and eventually won the championship with thirty points defeating closest rival and teammate Argentine driver Juan Manuel Fangio by three points. The competitions held across six cities in Europe (Silverstone, Monaco, Bremgarten, Spa-Francorchamps, Reims-Gueux, and Monza) and one in the United States (Indianapolis) with the Alfa Romeo team winning the constructors’ championship.

With a proud history span 70 years at the 2019 event, the British event has remained a permanent fixture on the FIA Formula One calendar. British driver Lewis Hamilton driving for the Mercedes-AMG Petronas Motorsport team currently leads the winners’ board with a total of six wins having won in the years 2008, 2014, 2015, 2016, 2017, and 2019. Hamilton is followed on the leader board by the legendary Jim Clark and Alain Prost with five wins each at the British race.

Other British Grand Prix winners include Nigel Mansell with four wins, Michael Schumacher; Niki Lauda and Jack Brabham with three wins apiece. Among a host of drivers with two wins on the British circuit, only Sebastian Vettel riding the Ferrari is currently competing at the Formula One competitions.

Before its incorporation into the FIA Formula One calendar, the first two editions of the British Grand Prix held from 1926 – 1927 at Brooklands located on the outskirts of London the British Capital. However, due to the devastating effects of World War II on London which also affected Brooklands, the end of the war saw the springing up newer circuits across Britain as normalcy returned. These newer circuits were built on the abandoned British Royal Air Force airfields one of which was Silverstone built in Northamptonshire in central England. 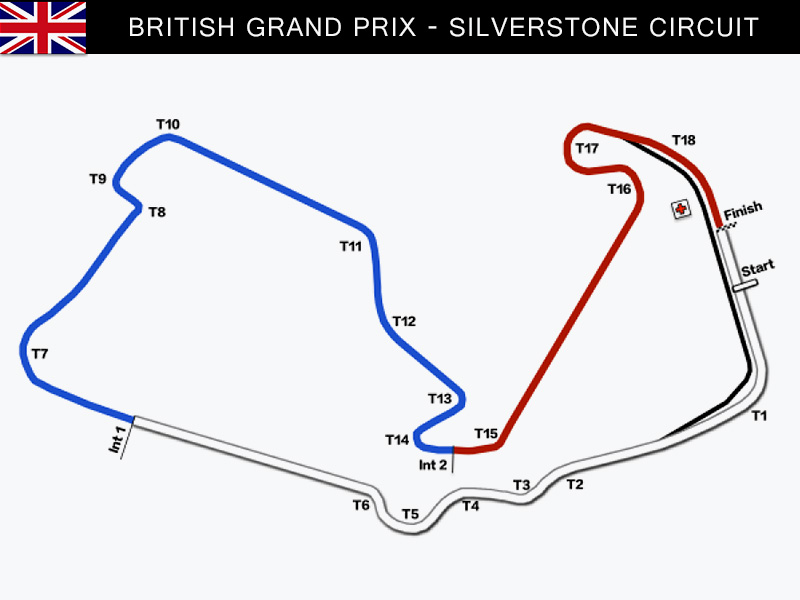 Although, many lovers of motor racing and extension Formula One events hold Silverstone as a revered track, not until 1987 did the Silverstone circuit became the permanent home of the Formula One in Britain. After abandoning Brooklands due to war destructions, Silverstone hosted the first five races after the war from 1948 – 1954. However, Silverstone shared the hosting rights first with Aintree from 1955 – 1962 and later with Brands Hatch from 1963 – 1986.

Silverstone finally became the home to Formula One in Britain in 1987 when the governing body sought to lock down individual tracks to long term contracts as host to the Grand Prix races across Europe and the United States. After much deliberation, Brands Hatch had to make way for Silverstone due to safety concerns and restrictions to expand the venue. Silverstone won the contract for an initial seven years period leading to a fruitful partnership till the present day.

Despite the resounding success achieved in the partnership, the Silverstone British GP had a disagreement with Formula One organizers in 2003 over increased funding necessary to improve the racing track facilities. However, the parties reached a truce leading to an extension till 2009. Further issues cropped up, and event organizers announced in 2008 that at the end of the current contract with Silverstone the race will move to Donington Park from 2010 for ten years.

With Donington Park failing to secure the necessary funding to host the race, organizers terminated their contract and awarded the same to Silverstone for seventeen years. On 11th July 2017, the British Racing Drivers’ Club (BRDC) owners of the Silverstone race track announced that they have activated a break clause in the contract signed with the Formula One race organizers. The 2019 edition may have represented the last F1 race at the circuit. However, after a series of meetings between both parties, a few days before the 2019 competition, both parties confirmed the signing of an agreement that will see Silverstone continue to host the event until 2024.

What time does the British Grand Prix start?

The F1 races at the British circuit are usually held in the second week in July. As with all races, the race occurs over the weekend starting on Friday and ending on Sunday. The race begins with a series of practice and qualifying sessions to determine the positions of drivers on the racing grid.

Typically, the primary race of the British Grand Prix start time is 2:00PM (British Standard Time) on the Sunday of the race weekend. Drivers take a position on the grid based on the quickness recorded from the time laps achieved in the qualifying sessions. With a 52 lap race and race distance of 4,649 km, Silverstone remains one of the fastest tracks on the F1 calendar for drivers to pit their wits.

In recent times, starting from the pole position does not guarantee winning the race. At the 2018 race, Lewis Hamilton secured a record sixth pole position and four in a row at Silverstone. However, at the main race, Sebastian Vettel pipped him to the podium at the main race to win the British event. In the 2019 competition, Valtteri Bottas won the qualifying sessions and started on pole. However, Lewis Hamilton won the race at Silverstone employing a personalized plan not discussed at the team’s meeting.

The F1 British Grand Prix continues to play host to the best drivers on the Formula One circuit. Furthermore, based on current agreements, it is hoped that Silverstone continues to provide an open door to lovers of motorsports. The course has played host to a lot of race car drivers right from the first world championship events held in 1950 till the 2019 version.

Betting on sporting activities remains one the most exciting ways to enjoy the unfolding drama of in the motorsports racing events. The suspense, emotional rollercoaster, adrenaline rush, and euphoria associated with the betting process helps keep fans attached to the teams they support. With a long and deep history, throwing wager or betting on sporting activities continues from ancient till the present day.

The dramatic rise in popularity due to the advent of the internet makes the placing of bets on race outcomes such as the British Grand Prix results easier for willing individuals. The option of in-race betting and the ability to choose and compare odds from a wide range of betting companies makes the processes less cumbersome and faster. Individuals placing bets can react to news faster and do research more effectively before placing their bets right from the comfy of their rooms.

In 2018, Formula One completed signed a mega commercial deal worth in excess of $100 million with betting companies for sponsorship after decades of resistance from the former owners. The partnership with the betting companies continues to be successful leading to increased money coming into motorsports to enable organizers to improve the safety and welfare of stakeholders, most especially the driver.

The United Kingdom and by extension the F1 British GP represent the most valuable broadcast market of the FIA controlled Formula One race series. Due to few restrictions placed by the regulatory bodies on the advertisement of gambling companies during sporting events, the betting companies see British Formula 1 race as the key to providing motorsport lovers the perfect avenue to exercise their betting fantasies.