The MotoGP Assen is one of the prestigious events in the MotoGP World Championship calendar. It has been conducting for longer than any other race in the calendar, with the only exception — the Second World War years. As a result, there is a large amount of interest and focus upon the MotoGP Assen results even before the event comes close. The bookmakers stack up to their markets well ahead of race day. Hence, no need to be on top of the game to succeed when taking a bet on this event. 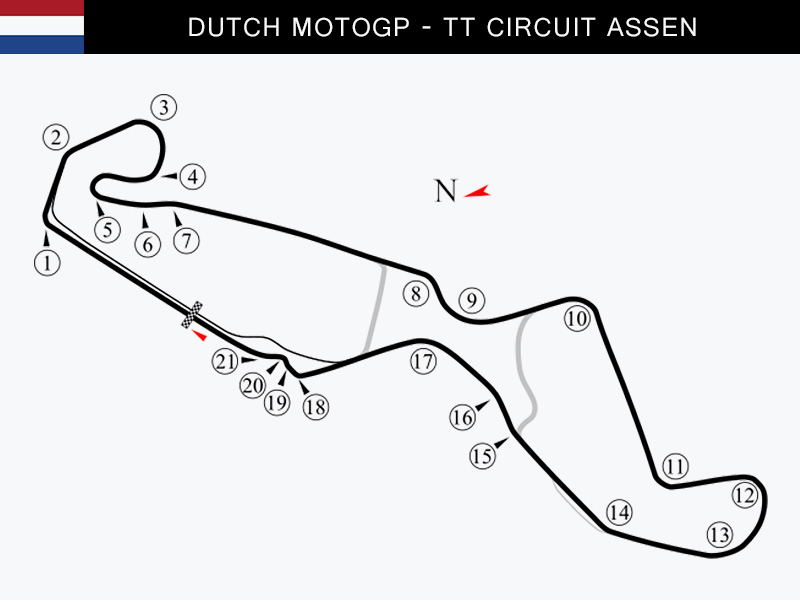 The TT Circuit Assen is located in the Netherlands. It was built in 1955 and is often considered as the Cathedral for motorcycling races. The total capacity is 110,000 with a possibility to seat 60,000 spectators. Apart from hosting the MotoGP races, the track also witnesses Superbike World Championship, Dutch TT, Champ Car World Series, and Motocross World Championship, amongst others. It is 4.545 km long with 12 right turns and 6 left turns. As a result, it happens to come with slow corners and flats that are extremely fast. Compared to most other tracks, the banks on the curves are grippy, and they allow riders to achieve higher speeds.

The Dutch MotoGP timetable is more or less similar to the event taking place in late May, June, or early July. The Dutch TT had been traditionally held in June’s last Saturday, but it has recently been moved around to accommodate other races. Earlier, many classes, from 50 ccs to sidecars, used to be part of the event, but it has now been reduced to just three categories – Moto3, Moto2, and MotoGP. After being first held in 1925, this race is regular in the calendar.

The Assen MotoGP is one of the anticipated events in the world championship calendar. This is due to its competitiveness. Throughout its history, there have been very few repeat winners in subsequent seasons – apart from the era of domination by Valentino Rossi at the turn of the century. Even though Marc Marquez has been the top dog in Moto GP over the last few years, he has been able to pick up just two victories. The 26-year-old failed to overcome Maverick Vinales at the 2019 edition, and he ended up finishing second. Marquez has never been able to shine at this event with his previous win coming in 2014.

Andrea Dovizioso has once again been going through a strong 2019 campaign, even though he has not been able to pick up the championship title just yet. After having managed 14 wins from his 207 starts, the 33-year-old will be hoping to utilize his experience and pick up his first victory at this event. However, the lack of significant wins in his career makes it difficult to back the veteran in the betting odds even if Ducati comes up with a fast bike.

Álex Rins was able to enjoy a second-place finish in the 2018 edition of the Dutch MotoGP. However, this happens to be his only podium finish. Even with the news of Suzuki managing to achieve plenty of new updates for the race, it may be difficult to expect anything more than a podium finish for the player.

There is a tremendous amount of interest from bookmakers when it comes to providing markets related to the results of this event. Since the race is quite tricky, and there is a great deal of competition, it is important to seek the help of experts and professionals to succeed when punting on this championship.

The market for the race winner is, by far, the most popular. Since there have been no rider camping on the podium, it clearly demonstrates the competitiveness that punters can also expect. Still, the experts will be able to provide great insight into the race. Their work comprises of analyzing current form, past record, favorite track, weather conditions prevailing at the track, efficiency of team strategies, and the position of the rider on the starting grid.

There is the fastest lap market that is also quite attractive in terms of returns, but the process of getting it right can be quite cumbersome for the inexperienced. The tips will enable to go through riding characteristics, track status, fuel level, and tire wear to assume the riders who can go through a lap faster than other competitors. The Assen MotoGP lap record has been broken multiple times in the last few years. It is highly likely that it will fall even further as the bikes get faster.

The 2019 race of the Moto GP event was spectacular entertainment, and it was a similar story even on the betting front. The future editions also promise to be more of the same.