The German MotoGP is one of the prestigious events in the world of motorcycle racing. The first incidence of the event was in 1925, but it has been a regular fixture of the Grand Prix motorcycle racing season since 1952. The race has been held at various locations before it became the Sachsenring MotoGP. 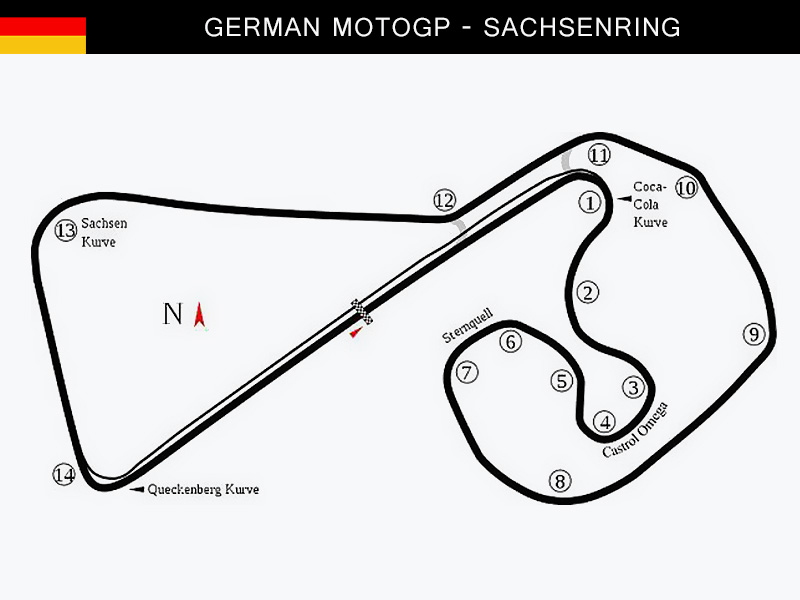 The Sachsenring is a circuit that is located in Saxony, Germany. It is the destination for the German motorcycle Grand Prix event alongside several other races within the ADAC GT Masters, FIA GT1 World Championship, and more. The track continues to attract crowds of more than 200,000 spectators for every race. There are different kinds of track layouts, and the length can be customised from 1.7 km to 3.7 km depending on the three choices. The track switched between East and West Germany during the periods of separations. Hence, the race was held at destinations like Hockenheim.

The Moto GP Sachsenring is a race that is held in the first half of the calendar more often than not. This race is accompanied by several other European events over the first few months. Even though this does not occur in the tail end of the Moto GP season, it plays a crucial role in terms of deciding the Riders’ Championship and more. The event’s start time is predominantly held in the month of July.

The Spaniard has been able to pick up seven successive victories at the Sachsenring, and it has been a huge factor behind his ability to win multiple Riders’ Championship on the bounce. The 26-year-old has been able to win every MotoGP even he has taken part in the circuit. Furthermore, he has been able to achieve the perfect trio of pole position, fastest lap, and victory in five out of the last seven runs in this race.

Andrea Dovizioso has been able to enjoy a strong run in the 2019 campaign, but he has not come close to challenging Marquez for the top spot in the Riders’ Standings. Even though it is better to look at alternatives for the different markets, the Italian has not shined when it comes to these events. He has been able to achieve just one podium finish at this event in the last six years.

Maverick Viñales so far enjoyed a disappointing 2019 with Yamaha with the rider retiring in three races even before approaching the middle of the season. However, he has had a decent record at the German Grand Prix with podium finishes in the last two editions. Ever since moving from Suzuki to Yamaha in 2017, the 24-year-old has had an upturn in fortunes.

Honda has been the most successful manufacturer at the German Grand Prix by a huge distance. The Japanese manufacturers have been able to win the event for the last nine years in succession, while there was also a strong period of dominance in the early part of the century. The closest competitor to Honda in the MotoGP class at this event would be Yamaha, who have only three wins.

The world of betting on this racing event is immensely popular thanks to the competitiveness of the race. It is also historically very important to the world of motorcycling. For this purpose, almost every bookmaker tends to offer a large number of markets will ahead in advance.

The interest in the event starts from the qualifying sessions, which are extremely useful in deciphering the potential for the race. Considering that the pole position has led to a winner in five out of the last seven editions of this race, it would be a good idea to take up a stance for the race depending on the outcome of the qualifying sessions.

Even the practice sessions prior to the race will be a good adjudicator of the pace possessed by each rider. Marc Marquez has been able to set the fastest lap in most of these last seven victories. The Spaniard would be a great choice in the German MotoGP results. Even when considering the domination that he has displayed in the last seven years, bookmakers continue to offer a good price for backing the 26-year-old.