MotoGP Qatar GP is an event that has played a role in kickstarting seasons since 2007. New teams, drivers, and regulations welcome fans from all over the world. MotoGP Qatar qualifying sessions mark the beginning of new seasons. Also, MotoGP Qatar’s start time is around 5 pm in UK time, taking place quite late to avoid that intense summer heat. 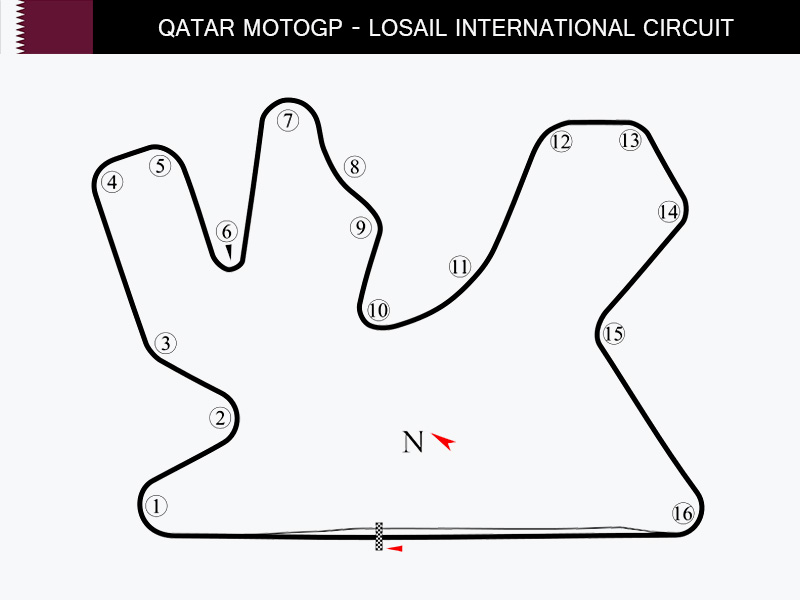 Losail International Circuit is one of those modern tracks in MotoGP’s calendar. 2004 marked this circuit’s opening, and it hosts several events such as GP2 Asia, SBK Championship, 8 Hours of Doha, and the WTCC Race of Qatar. This track is 5.380 km long with 16 turns. Since sand encroachment is a problem just like at the Bahrain International Circuit, there is artificial grass used on the edges to avoid such a problem. This circuit is also capable of hosting night races since outdoor lightning was added twelve years ago.

The MotoGP Qatar schedule can be discussed easily. It’s created in such a way that the race usually happens towards late March – usually week three. However, this year’s edition was an exception, taking place in March’s second week. This is one of the earliest start times recently, but it is primarily done to avoid heat.

2019’s edition of MotoGP Qatar became an opening race of the new season. This brought great expectations on Marc Marquez as a defending champion, while other riders were keen on winning as well. This race did not go in favor of the Spaniard, who finished second. Even though he has gone on to experience a strong season, this event turned out to be a struggle for Marquez.

Andrea Dovizioso was able to put up an intense fight and start this campaign with a win. It put him on top of the Riders’ Championship, and he has been able to maintain this status for a while. However, it is only towards the season’s mid-part that the better pace and consistency of Honda started paving the way for Marquez.

Jorge Lorenzo was able to become another rider to set a perfect hattrick. However, he has not been close to matching these achievements, as he has not even featured on the podium in the last four races. He remains the most successful rider on this track.

Valentino Rossi has a good record of this event. He has been able to come out successful four races later, but his recent form has not been great. It would not be a great idea to back him for this event. Yamaha’s pace in the early pre-season testing will be able to provide insights about Rossi’s potential for impact.

Among teams, Yamaha has had the bulk of success in the MotoGP class. Aprilia may remain top of the standings with 12 wins, but most have been in the 250 ccs and 125 ccs categories. Meanwhile, Aprilia has been able to pick up 12 wins in total. Yamaha’s return may not be as good, but most wins have been in the top class. Honda comes a distant second with 3 wins.

A lot of betting interest is present ahead of this event. Apart from being a significant event in the motorsport calendar, this race also kickstarts a new season. Hence, it is seen with a lot of excitement from supporters. There is also a lot of uncertainty since very little information is available about the bikes before they step on the track. Hence, it makes sense to follow the advice of excellent tips to succeed when calling shots.

Pole position has not led to a win at this race in the last two editions. However, there is a history of riders starting on pole and going on to take the top spot. The 2016 and 2017 versions were able to witness this trend.

The fastest lap has been a less critical market at this event. There has been just one instance when a perfect hattrick – pole position, fastest lap, and race winner – has been achieved in the last five seasons. The 2016 race was able to witness this outcome, as Jorge Lorenzo dominated the entire weekend with his Yamaha.

Dovizioso has now won the Qatar event twice in a row, and he has finished in the top two places for five consecutive seasons. It is hard to look past his because Ducati can take advantage of this track. It would be hard not to consider Dovizioso in the MotoGP Qatar results. At the same time, Marquez has been in such good form over the years that the MotoGP Qatar may invariably see him on the podium at the least.