MotoGP Aragon is one of those events that entered the MotoGP calendar to become a replacement for the Hungarian Grand Prix. It’s been held since 2010. The Aragon MotoGP takes place in Spain where other events take place. Still, this competition has its own charm thanks to aspects such as the Aragon MotoGP circuit. The MotoGP Aragon track comes with challenges like tight turns, long straights, and sweeping turns. Riders also get to compete on a track with decent overtaking opportunities, which will lead to many spectators seeking the MotoGP Aragon schedule. 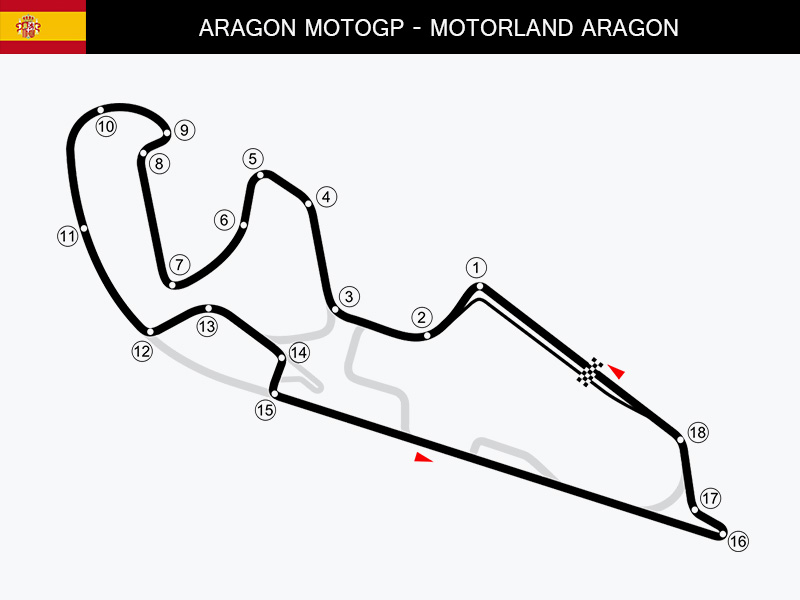 Motorland Aragon is one of those modern circuits out there, and it’s also known as Ciudad del Motor de Aragón. Located in Spain, this circuit opened ten years ago, and it hosted significant events like the World Series by Renault amongst others. There are two versions of this circuit, depending on the type of event. For MotoGP races, its track length is 5.078 km. Jorge Lorenzo holds the lap record of 1:48.120 set in 2015.

This event is usually held towards late September. 2012’s edition, though, happened so late that September almost concluded. This event occurred on 30 September. 2019’s timetable of the race is scheduled for 22 September.

This year’s edition is expected to be a straight battle between Marc Marquez and the rest of the pack. Marquez boasts an impressive form lately, and he is now aiming for a fourth consecutive Riders’ Championship title. Unsurprisingly, the 26-year-old has been able to pick up four wins in the MotoGP class, which is twice that of Jorge Lorenzo who comes second. Marquez is also aiming to pick up his fourth consecutive success at Aragon.

Andrea Dovizioso has been enjoying a healthy 2019, and he remains without a chance of winning the title. He got a podium at this event for the first time in his career. He also set the fastest lap.

Lorenzo wasn’t taken into account for the Rider’s Championship title for 2019, but he cannot be looked down upon when it comes to this event. Lorenzo qualified on pole position with his Ducati last season, while he finished on the podium in seven consecutive seasons before his run came to an end last year. It would be hard to look down upon an experienced campaigner for this race, but he has made it into the first 10 this season.

Andrea Iannone made the most of his impressive speed last season by reaching podium places, but 2019 has so far been a struggle for the Italian. His Aprilia has let him down on multiple occasions, and he has not been able to finish higher than 10th this season. It may not be a great pick to back the 30-year-old in the betting markets.

Álex Rins has had a strong 2019 with the Suzuki that has helped him pick up two wins already this season. His success at the British Grand Prix at Silverstone was quite impressive, and this alone places him in a very strong position concerning this race. Rins has been unable to step on the podium at Aragon, but he will be camping for success in 2019.

Spain, unsurprisingly, has contributed a significant chunk of the success at this event with 19 wins. Italy comes a distant second with only two wins, but none have been in the MotoGP class. In such a case, Australia would come second with two wins in this top class.

Several bookmakers will take a special interest in Aragon, considering that it occurs in a crucial moment of the campaign. It has a chance to decide titles.

History has been in favor of Honda as a manufacturer at Aragon. This team has been able to pick up six wins out of nine races held at this event. Moto GP has mainly belonged to the Japanese, who have been able to win the event in all of the races since 2011. Ducati enjoyed its sole success outside the Japanese in 2010.

MotoGP Aragon results will be a big focus of this race’s weekend. Since there have been predominantly Spaniards that have ended on podium, interest surrounding MotoGP Aragon winners is skewed towards riders from this country.