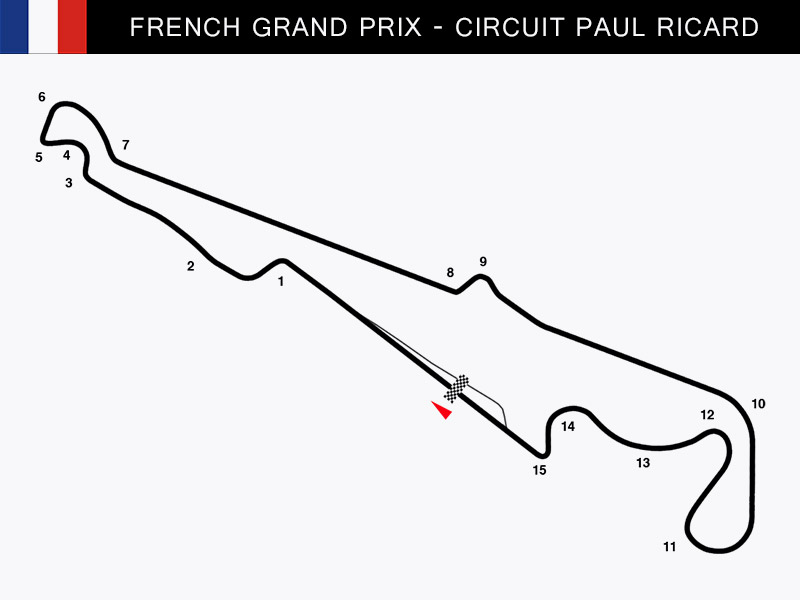 The French Grand Prix circuit has changed several times over the century, but it is now held at the Circuit Paul Ricard, which was constructed in 1969. It has been the destination of this event on and off since its construction, and it has undergone several divisions. The current layout is 5.842 km long with 15 turns. Since the track happens to be very flat, it has the distinct blue run-off areas that are extremely popular. Unlike in most of the old circuits, the run-off areas in this track are quite sizable. The lap record of 1:32.740 is held by Sebastian Vettel set in his Ferrari in 2019.

The French Grand Prix is a regular feature when it comes to the Formula One schedule. It has been featured consistently for most of the F1 campaigns. However, it does not have a huge role to play towards the end of the season. Instead, it has a history of being in the middle of the season and helping bring about a change in the title challenge. The 59 times that this event has taken place in the F1 campaign since 1950 has largely been devoid of title successes.

The 2019 edition of the French Grand Prix trophy was won by Lewis Hamilton, who has been able to enjoy only limited success at this race. Yet, this was his second successive victory after having been previously successful in 2018. Only seven drivers have been able to pick up more than two victories at the French Grand Prix. Michael Schumacher is the most successful driver in this race with eight wins.

Mercedes have been able to come about with reasonable domination of the event after they have picked up victories in 2018 and 2019. The form and pace shown by the German team are expected to keep them in front of the French Grand Prix results for the foreseeable future. The likes of Red Bull and Ferrari have been playing a lot of catch-ups. Even though Ferrari has been immensely successful in this event, they have not been close to their best in recent years. The last victory in the French Grand Prix for Ferrari was in 2008, while their last win in any F1 campaign was in 2018.

The 2020 F1 French Grand Prix was able to produce a lot of excitement, but it was a dominating performance from Hamilton that saw him move closer towards establishing a very strong foundation in the Drivers’ Championship table. Despite being dominated by his teammate Valtteri Bottas in the first two qualifying sessions, Hamilton did well in Q3 and grabbed the pole position. He was able to end up at the top of the podium with an 18-second advantage over his teammate, while Charles Leclerc came third in his Ferrari.

The victory has put Mercedes closer to Williams, who is the second most successful team at this event. Mercedes have now picked up seven victories while Ferrari has had the bulk of success with 17 wins as a constructor at the French Grand Prix F1.

The betting markets related to this race are immense in number thanks to the history, popularity, and excitement. Yet, the winning odds will be the most popular, and it is also quite challenging since none of the recent crops of drivers have been able to dominate this event, unlike Schumacher in the early part of the century. Hamilton is the most successful among the current crop of drivers with two wins, but he is way behind Schumacher, who has eight wins.

There is enormous interest in terms of the French F1 Grand Prix since it is a highlight event in the calendar because of its history, pedigree, and ability to provide a lot of excitement. Even though the French Grand Prix winners odds are an extremely popular market, there are many more like the podium finish, fastest lap, pole position, and more in the grand scheme of things to concentrate on.