MotoGP in Brno has been an iconic event for several decades. It was previously known as Czechoslovak Motorcycle Grand Prix before 1993, and it has been part of the World Grand Prix series since 1965. A significant change came about in 1987 when it moved to the Masaryk Circuit in Brno. Since then, MotoGP Brno has been a prestigious competition. 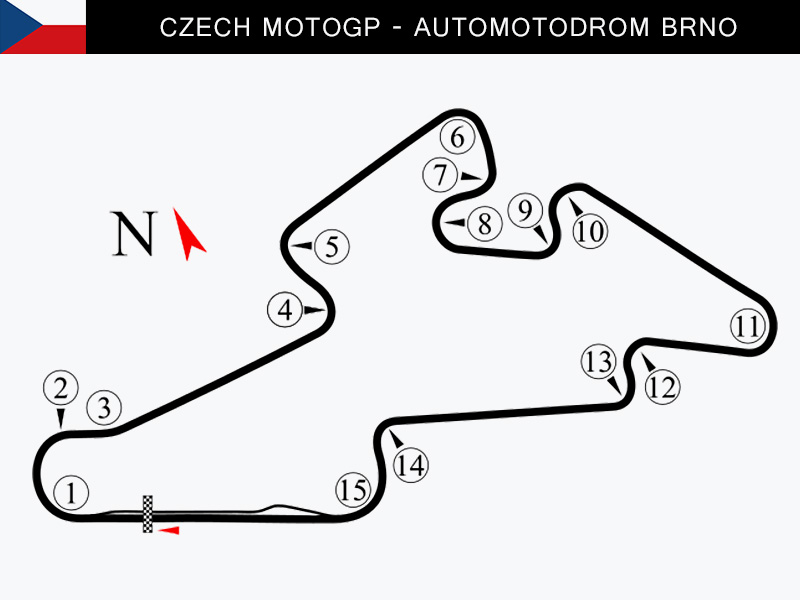 Automotodrom Brno is one of the two motorsport tracks located in Brno, Czech Republic. Even though this circuit has been around since 1930 or so, it’s been altered on several occasions, and the current track has been in place since 1986. This was one of the oldest street circuits, and it was also exceptionally long at 29 km, while now it’s been reduced to 5.403 km with 14 turns. Other notable events, besides MotoGP races, are the Superbike World Championship, World Touring Car Championship, Formula 3, and A1 Grand Prix.

The MotoGP Czech Republic is usually held in August. In recent times, this event took place in early August. It would be a surprise to see the 2020 event being held at around the same time.

Marc Marquez was able to cement his authority in the Riders’ Championship race by picking up a victory at the 2019 edition. He was able to qualify on pole position, and this was converted into a victory at the MotoGP Czech Republic in style. Even though he was unable to complete a clean hat-trick after conceding the fastest lap to Alex Rins, it was a great day for him. Marquez’s position in the title race was made stronger with his third victory there.

Andrea Dovizioso started this season with a victory, but the Italian has just overcome a mid-season slump. Even though he has never been able to win a Championship title, his recent form has been excellent. As a 33-year-old who also managed a 2018 win by qualifying on pole, he’s outstanding.

Alex Rins had a strong season by competing for the second position in the Riders’ Championship table, but there is even an outside possibility of title success. He is also yet to win a major title, but he has been able to recover his hunger for the Czech event with a fourth-place finish in 2019. In eight races at this event, Rins has finished fifth or higher in five races.

Unsurprisingly, Honda managed an excellent performance. Their recent success has also been evident that this race with three wins in four races. Even though Ducati and Yamaha have also been able to pick up a pole and win, their successes have been far and few between. Opting for a Honda success would be smarter at this event.

There is a tremendous amount of interest from betting enthusiasts. Since it takes part in the campaign’s second half, the title race in the rider and manufacturer segments become hot.

The fastest lap is an exciting market when it comes to this race, as riders who have not been able to make much of a difference in the overall results have been able to set extremely quick clubs. The last time a rider was able to set the fastest lap and win the race was back in 2016. It is better to opt for riders with Honda or Ducati.

Pole position is also a hugely rewarding market for this event. The pole winner has been able to finish top of the podium in four out of five Czech MotoGP’s. Marquez’s domination has been immense when it comes to poles, as he has qualified at the top of the grid in 8 out of 12 races so far.

Marquez has been the dominant figure, as he has claimed success in six out of the 12 races. It is no wonder that he has been leading the Riders’ Championship table. Brno MotoGP results are expected to be similar with more focus on the Spaniard. The winner market is an absolute priority at the Brno MotoGP, and it makes sense to use tips.