The Spanish MotoGP is one of the anticipated motorcycling events in the world. The Jerez Moto GP, as it is otherwise known, was first held in 1950 and it is part of the FIM Grand Prix Motorcycle Racing Campaign. Apart from the Moto GP races, there are plenty of World Championship races that take place in Spain. The popularity enjoyed by the Moto GP Jerez is quite immense thanks to its history and the unpredictability when it comes to Spanish MotoGP results. 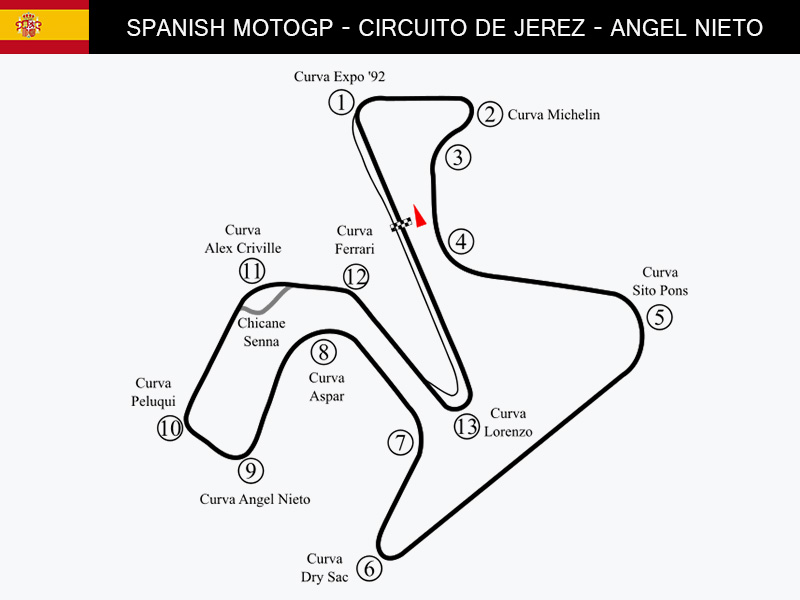 The Circuito de Jerez – Angel Nieto is located in the southern part of Spain. The track was first opened in 1985, and it regularly hosts a number of events — including Formula One, Superbike World Championship, GP3 Series, and F4 Spanish amongst others. The track first received a modification just four years after opening. In its modern version, the circuit is over 4.428 km. There are also 13 turns.

The Spanish MotoGP riders were last seen in action in 2019 when the event was held on May 5. The race is usually held during May to overcome the intense heat that can prevail at this location during the summer period. May acts as a shoulder season, and teams can experience substantially lower levels of heat. The event has also been shifted to early May to avoid rainy conditions. The track can also experience very cold weather during January, and they make an excellent testing location for mimicking winter races.

This Spanish event is a home ground for several MotoGP riders — new and old. The likes of Dani Pedrosa and Jorge Lorenzo had a long-standing interest when it came to winning the event in the past. Among the current riders, Spaniard Marc Marquez has been immensely successful at this race. Just as he has been able to pick up several World Championship titles, the 26-year-old has won the Spanish Moto GP in three out of the last six editions. He has also won the event in 2018 and 2019.

Even though Marquez missed out on pole position at the 2019 event, he was able to win the race and set the fastest lap.

The track is a home Grand Prix for Alex Rins, but he has never been able to win the event. He has started to show improvements concerning his finishes on the circuit, and his second-place finish in 2019 happens to be his best record so far.

Andrea Dovizioso has enjoyed a strong 2019 campaign. Even though the Italian is not in contention with Marquez for the Riders’ Championship, he has been able to pick up crucial victories along the 2019 season. After opening the campaign with a victory in Qatar, he also won the Austrian Grand Prix. Spain, however, turned out to be a disappointment for the Ducati drivers, as Danilo Petrucci was only able to finish in the fifth position at this event.

The betting tips for the race will be concerned about some factors like pace, form, and the possibility of any upgrades to the bike. Even factors like the weather will come into play, especially considering the location of some circuits.

Bookmakers provide many markets and odds related to this event. The market to choose the winner would be the most popular amongst punters and bookmakers. There have been four different winners of this event in the last five seasons. Hence, the process of predicting a champion becomes challenging without the right knowledge. The tips available for the event will be focusing on several parameters like form, pace, and even weather conditions at the time of qualification and the races.

The fastest lap is a market that is quite rewarding, and it can be deduced to a reasonable extent by the practice and qualifying sessions before the race. There are a number of factors that determine success in the market. The rider who manages to set the fastest lap need not necessarily win the race. There can be huge rewards while betting on the fastest lap when the race is taking place. Thankfully, a large number of bookmakers do provide in-play betting options for this convenience.

The returns on this market are quite decent, and the same is also true of the pole position. It does not directly make up a race winner, but keeping an eye on the team strategy can help in identifying those who have a good chance of getting a pole position. The 2018 and 2019 races did not see the pole winner win the race. Dani Pedrosa was the last to achieve this status back in the 2017 race.

All these factors become essential when it comes to getting successful while betting on the MotoGP Spanish GP. Being one of the premier races in the calendar, it attracts a lot of attention from spectators, punters, and bookmakers. Yet, the use of proper tips can undoubtedly help to reap the rewards.