France Moto GP race is one that has an extensive history when it comes to motor racing and not just motorcycles. This is mostly down to the country’s history when it comes to other motorsports. Over the years, this event has been held in various locations across France. After starting out in 1920, it is not a surprise that France’s MotoGP, which is also known as the Le Mans MotoGP, attracts such a huge fan following. Those incredible MotoGP Le Mans qualifying sessions mark the start time for this popular event. 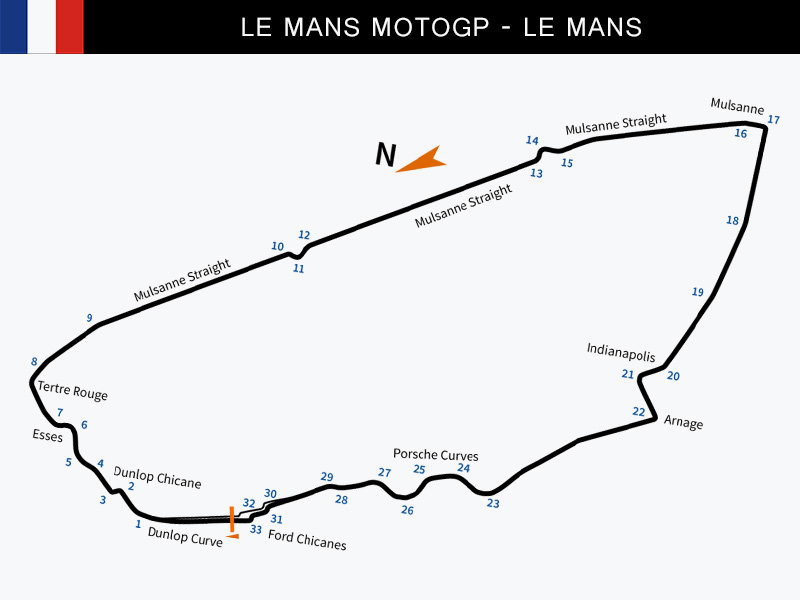 Le Mans circuit is one of those high profile destinations for motorcycle racing. After being held in various places, such as Charade Circuit and Circuit Paul Armagnac, races have been held at this circuit since 2000. This purpose-built track was constructed in 1965, and it comprises of 14 turns. It runs 4.273 km, and it’s quite challenging for newcomers. This circuit also manages to host other prestigious events such as the French Grand Prix and 24 Hours of Le Mans.

This event is usually held in the season’s first half. It’s also one of those early European races that kickstart the Moto GP season. After races are complete in the Americas, the map enters into a period where multiple European competitions come in quick succession. May’s third week has been a preferred time for holding this race, but there have been few instances when the race has also been held in the month’s early part.

Marc Marquez has enjoyed a tremendous run in the MotoGP calendar recently. However, his success at the French Grand Prix has been limited and the last two years have only been able to add to the slender number of victories he has achieved. As a 26-year-old who has been able to pick up a win in the last two editions of the Le Mans France MotoGP, he can do better.

Even though this race happens to take place on French soil, Spaniards have been more successful at this track than any other nationality in recent times. Casey Stoner is the only non-Spanish rider to have picked up a victory at this event since 2009. Dani Pedrosa and Jorge Lorenzo have shared successes over the last few years, while Maverick Viñales also picked up a win in 2017. Even though these riders have not been able to dominate the Riders’ Standings, they can be a good pick for camping towards a victory.

Honda has been able to claim a victory at this event for the last three years. Previously, Yamaha was also in a dominating position. Considering the amazing superiority shown by Honda in the Manufacturers’ Standings over a few years now, it is difficult to envisage a team other than the Japanese winning this event. Ducati has been able to make it to the podium on a couple of occasions – like in 2015 – but they have not been consistent enough on this demanding circuit. This year’s 2019 race did show a significant improvement with Andrea Dovizioso and Danilo Petrucci finishing in the second and third places.

Betting on this event begins with understanding those various markets that are available from bookmakers. Since the race is extremely popular, it is common to come across a large number of markets that not just focus on the winner.

The fastest lap market is quite a rewarding choice when it comes to MotoGP Le Mans. This market begins as soon as a timetable kicks off. An excellent study of the practice and qualifying sessions will be able to provide information about riders who have fast cars and favorable conditions.

Qualifying sessions are substantially crucial at this race with three out of four editions witnessing a pole winner finishing as the race winner. A good adjudicator of any qualifying pace will be a recent form and the conditions suitable to a particular team.

Team strategy has been immensely helpful in changing the outcome of a race winner when it comes to Moto GP France. Since three out of the last four races have witnessed the rider qualifying at the top of the grid going on to win the race, it is a good idea to back the pole winner for the race.