MotoGP Austria is an event that has been on and off from the calendar throughout its existence. However, it has recently become a regular fixture after making his return in 2016. Since its inception in 1971, this event has been held at various places such as Salzburgring, which was a destination of this event for a major part of history. The race’s start time has been switched to August since its return. 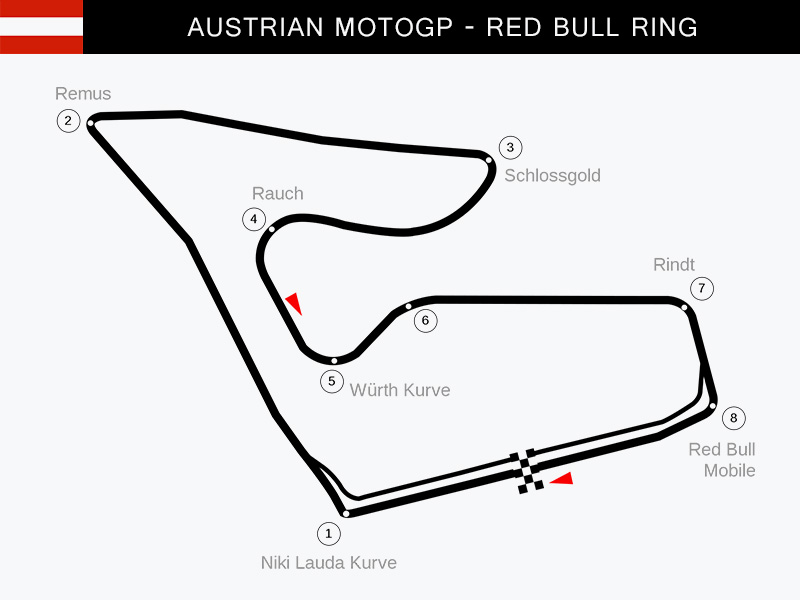 Red Bull Ring is a circuit that is located in Austria, and it has been a regular feature for the Austrian Grand Prix during various stages of its existence. After the Austrian Grand Prix made a return to Moto GP in 2016, it has frequently been held at this destination. This track may hold only 40,000 spectators, but it features an impressive set of corners and turns. Ten turns run for 4.318 km. Apart from Moto GP, other events like Formula One, DTM, and more are held on this circuit.

Austrian MotoGP is held alongside several other European races. Crucially, this event happens to take place in the middle of the campaign with August being the preferred month of choice. As a result, this can be a race where a significant shift could happen for many riders and manufacturers.

There has been domination from Italian riders lately. Andrea Dovizioso has especially been spectacular after getting himself to two wins in the last three editions. He has also finished in a podium spot ever since the Austrian GP made a return. As a result, the Italian is in a strong position to continue this record even for upcoming seasons.

Even though Marc Marquez has been able to dominate the Riders’ Standings over the last few years, he has struggled with the Red Bull Ring. He’s been able to achieve three straight pole positions, but none of those starting spots gave a victory. In fact, Marquez is still waiting for his first victory at this event.

Spaniards have had a tough time at this event, and Jorge Lorenzo is no different, even if he managed to win the 2018 race ahead of Marquez. This race has predominantly been skewed towards Italian riders, and this may be a good opportunity for punters interested in taking a side on this race.

Ducati has been a successful manufacturer since the race returned in 2016, as they have been able to win all races. There have been three Italian riders who have won a top spot. In previous editions, though, Honda and Suzuki enjoyed a lot of dominance towards the end of the previous century. Even though Honda has been able to dominate the Manufacturers’ Standings with a huge advantage over the likes of Ducati and Yamaha, they have simply been unable to cut the mustard at this race.

If Honda ends up winning the 2020 edition, it would be the first time that they achieve success on this track since 1997 when this event took place at A1 Ring. However, discounting Honda is difficult when it comes to the 2020 result.

Betting action for this event begins with the qualifying sessions. Every punter needs to be focused a few weeks before the race so that they are on top of the upgrades, form, team morale, track conditions, and so on. Even practice sessions that take place before races can be a good help when it comes to predicting those different markets put up by bookmakers.

The MotoGP Austria qualifying market is incredibly popular thanks to the pole position being a vital significant towards pointing names who end up on the podium. Even though the pole winner has not been able to win in recent seasons, it’s still beneficial to look at practice sessions and find out the rider who can win.

Ultimately, Austria MotoGP will all be about the race for podium places. A huge focus amongst punters will be on the Austrian Moto GP results, and the use of expert opinions can help in finding out those riders who can end up providing excellent returns with every bet.